Congratulations to Mark Judge who played at Stenhousemuir Walking Football, he has recently been selected for the England squad. 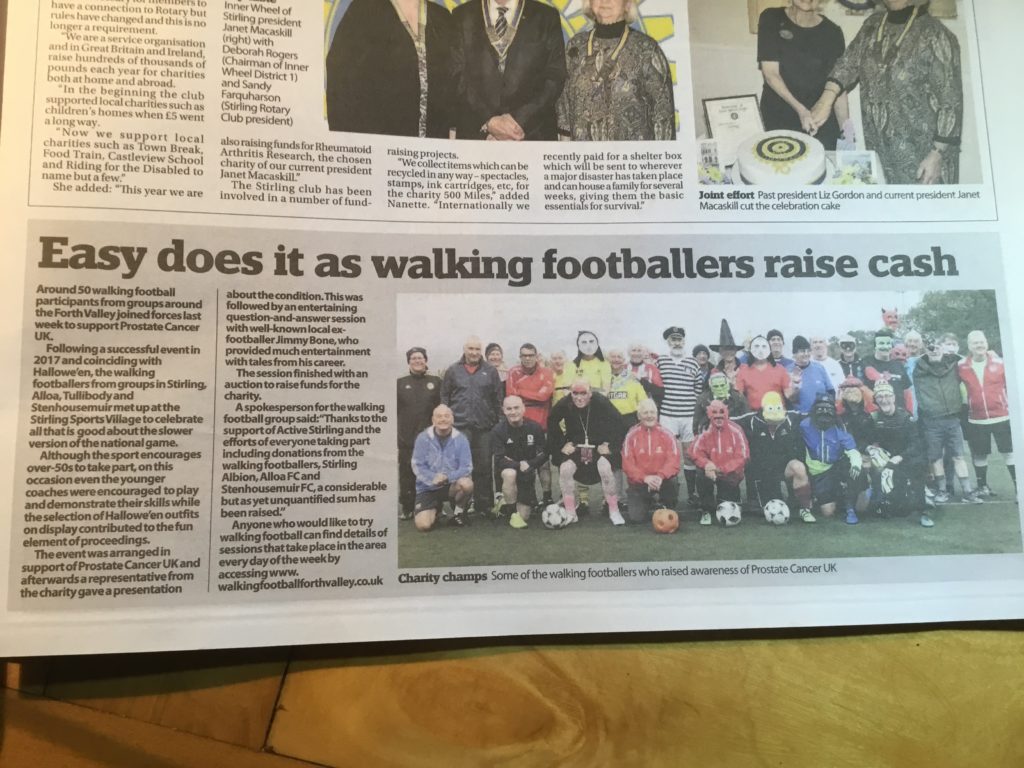 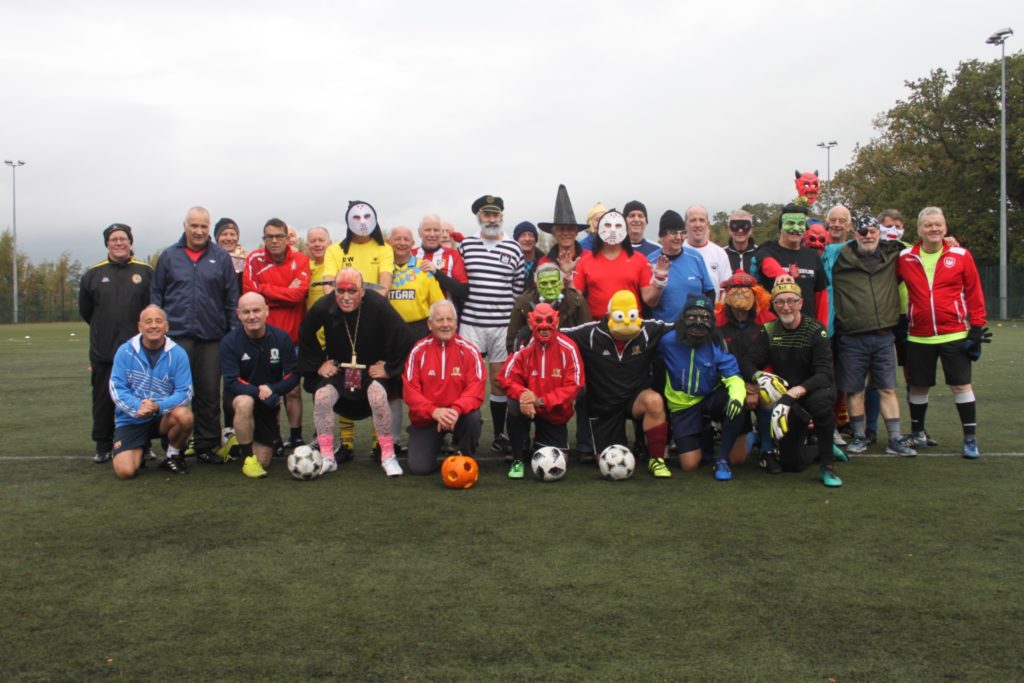 Following a successful event in 2017 and coinciding with Halloween, walking footballers from groups in Stirling, Alloa, Tullibody and Stenhousemuir got together at a “Gathering*at the Stirling Sports Village to celebrate all the is good about the slower version of our National Game. Nearly fifty players took part in a number of games and although the sport encourages over 50’s to take part, on this occasion even the younger coaches were encouraged  to play an demonstrate their skills! The selection of Halloween outfits on display contributing to the fun element of proceedings.

The event  was arranged in support of Prostate Cancer UK and after the games,  a representative of the Charity gave a presentation about the condition. This was followed by a very entertaining question and answer session with well-known local ex footballer Jimmy Bone who provided much entertainment with  tales from his career.

The session finished with an Auction to raise funds for the Charity.  Thanks to the support of Active Stirling and the efforts of everyone taking part, including donations from the walking footballers, Stirling Albion, Alloa FC and Stenhousemuir FC, a considerable sum in excess of £700 has been raised.”

Anyone that would like to try walking football can find details of sessions that take place in the Area every day of the week by accessing www.walkingfootballforthvalley.co.uk 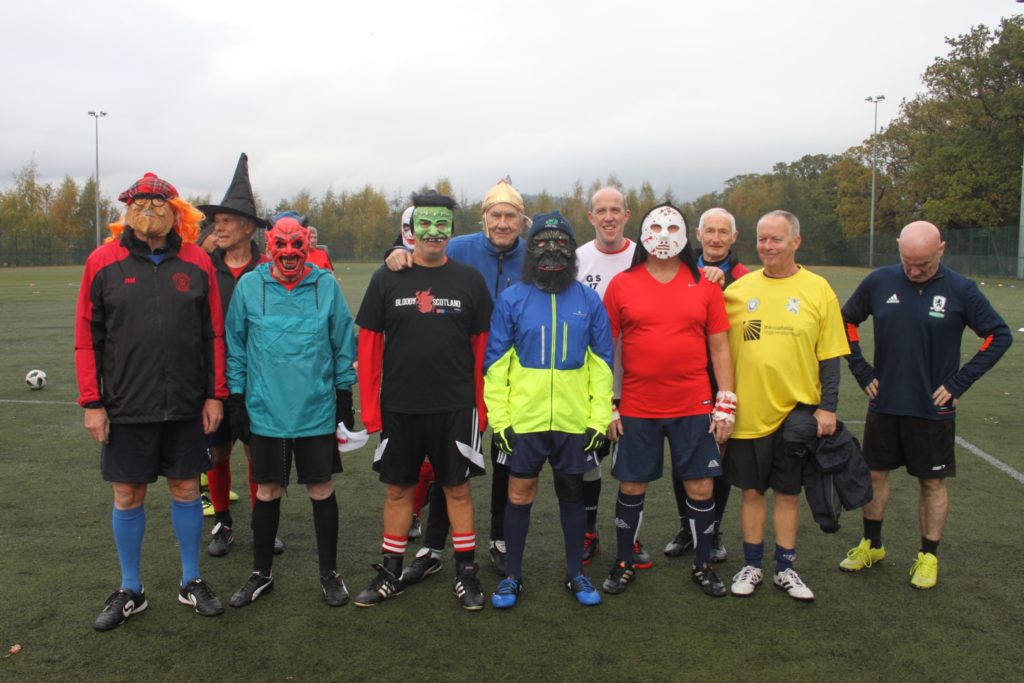 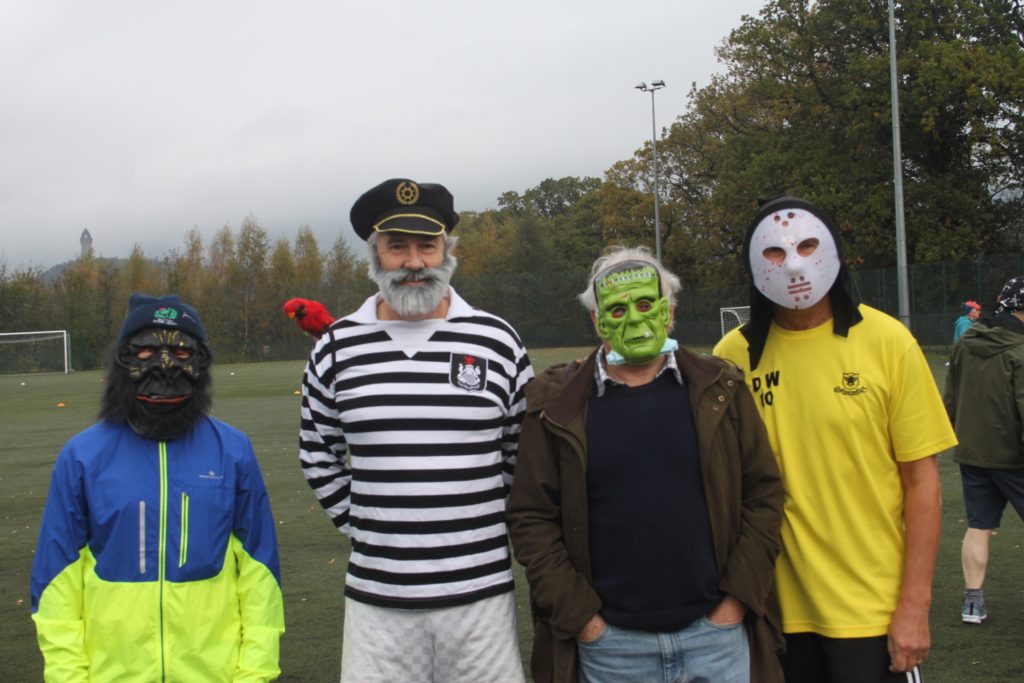 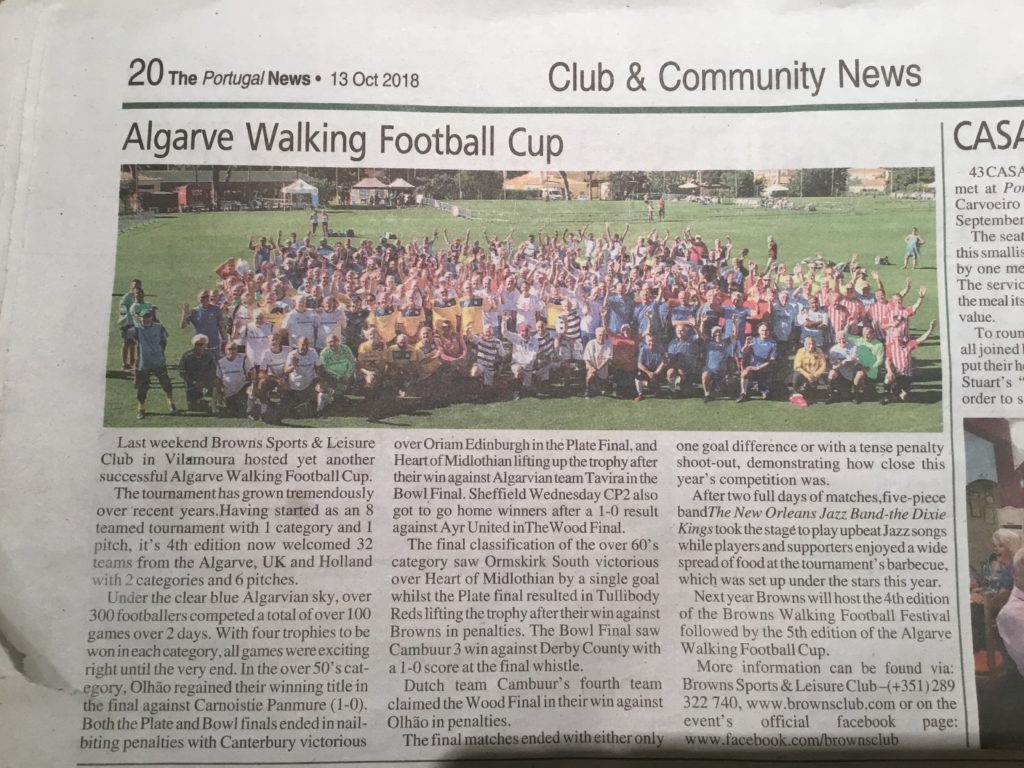 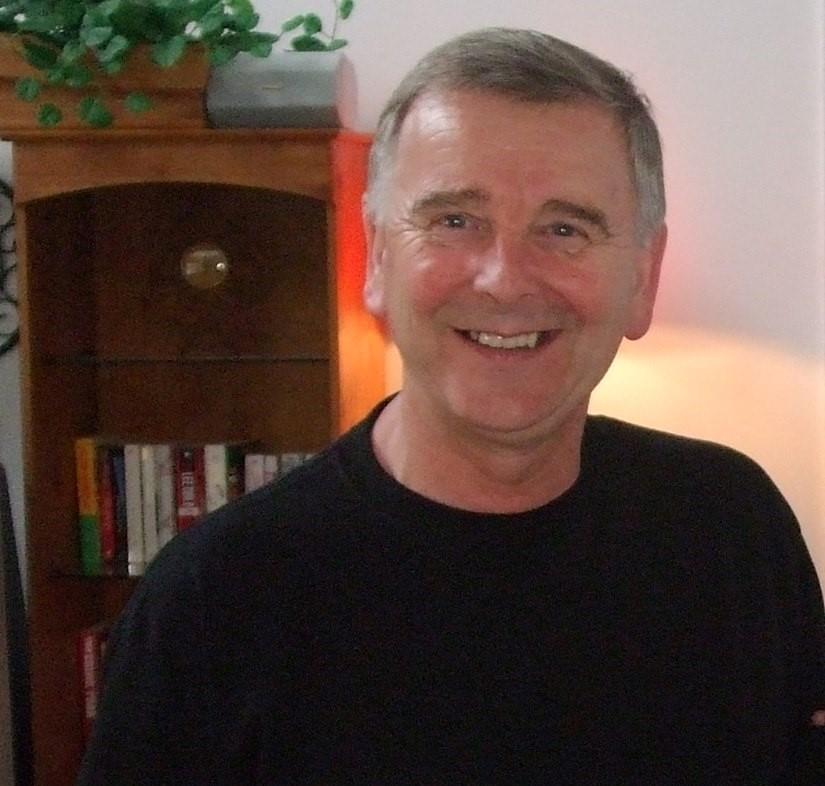 BEFORE he took up walking football, Derek Young thought his days on the pitch were behind him. He had been a keen player, but as he started to get older he found the sport was taking its toll. That, along with other commitments, eventually led to him hanging up his boots. That was until early 2014 when his son showed him a leaflet advertising walking football. He said: “I didn’t know what to expect, because it didn’t have the publicity like it has now. “I was a wee bit apprehensive thinking, it’s 50 plus, and at that stage I’m 65.” He was motivated to head along by a desire to take part in the sport again, while working on his fitness. “It was my love for the game,” he explained. “I just wanted to get back to playing football. “I just couldn’t believe there was still an opportunity to play football, albeit walking football.” He found it was exactly the kind of thing he had been looking for. “It was a good atmosphere, good camaraderie,” he said. “Everybody is there for the same thing, that’s the beauty of it – we’re all there to play football.” Three years later and Derek, from Alloa, now plays several times a week. Has taken part in a Scottish Walking Football League at Ravenscraig and went across to Algarve to play competitively. The 68-year-old has described it as an “absolute godsend” and has even managed to lose more than half a stone in the process – bringing him in line with his 50-year-old self. But the benefits don’t stop there. He said: “It brings a lot more than just the football, the whole camaraderie thing has been big – everybody that comes says that. “I would recommend it to anybody and you don’t have to be a super star to come along – just come along and enjoy the game.” Derek plays with a team at Indodrill Stadium on Mondays and has applauded the surface at the grounds. They have a coach and are even put through their paces with drills, but there’s no pressure to push yourself. He said: “For all the places we have played, it’s by far the best. “We get a nice warm dressing room, we are always made to feel welcome there – Alloa is just a roaring success.” Walking football, a low impact and low contact version of the sport, has developed on a huge scale. A number of teams have popped up across the UK and a Forth Valley Walking Football network has officially been formed. And the reasons to head along go way beyond exercise, as Derek has had the opportunity to meet a whole range of people. That, combined with the changing room banter and cups of coffee, make it a welcoming environment. “For anybody that is struggling socially it’s just an ideal thing, I don’t think anybody has come along that hasn’t felt the benefit,” he said. And although it is a gentle version of the game, Derek does admit the desire to win can grab them at times. “That competitive edge doesn’t go away,” he said. “You want to win; you’re playing a game to win.” “I just love it – it’s like turning the clock back, it’s like being a boy again.” Walking football is for men and women over 50 and takes place at the grounds of Alloa Athletic Football Club on Mondays. Sessions cost £3, including refreshments, for more contact Robert Wilson on 01259 219596.

A GRAND TOTAL OF 32 PLAYERS AND 4 COACHES WILL TRAVEL IN EARLY OCTOBER TO PORTUGAL FOR THE EVENT AFTER THE VERY POSITIVE EXPERIENCE OF PLAYERS LAST YEAR. WE WISH THEM WELL.

DUNBLANE WF CLUB has commenced operations on a Friday Evening, 8pm to 9pm at Dunblane High School. For further details please contact Scott Kinross at ACtive Stirling or better still . . . . . COME ALONG AND TRY IT FOR YOURSELF. . . .

OPEN TO ALL, this slower paced, low impact of the beautiful gam dis one of the fastest growing participant sports in the UK today. 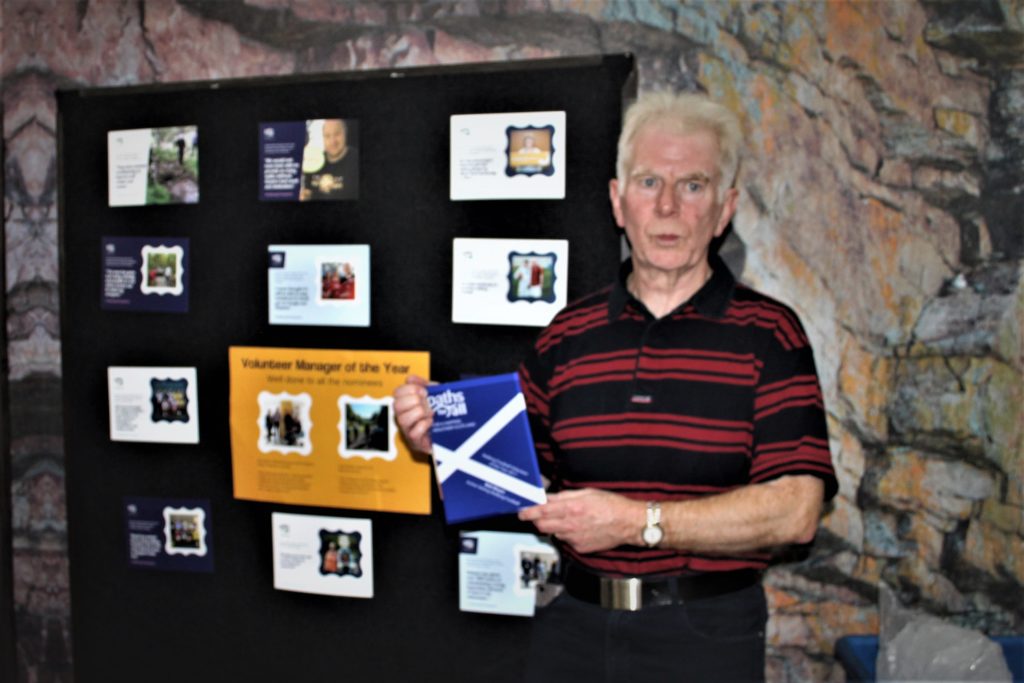 Many congratulations to Bob on his  recent award wins at Paths for All – The National Walking Football Volunteer of the Year 2017.

Not only a founding member in Forth Valley but a Walking Football Scotland Trustee, a huge advocate for Walking Football in general but also the chief mover in the After Football Coffee Club in Stirling and in introducing other sports to the group. 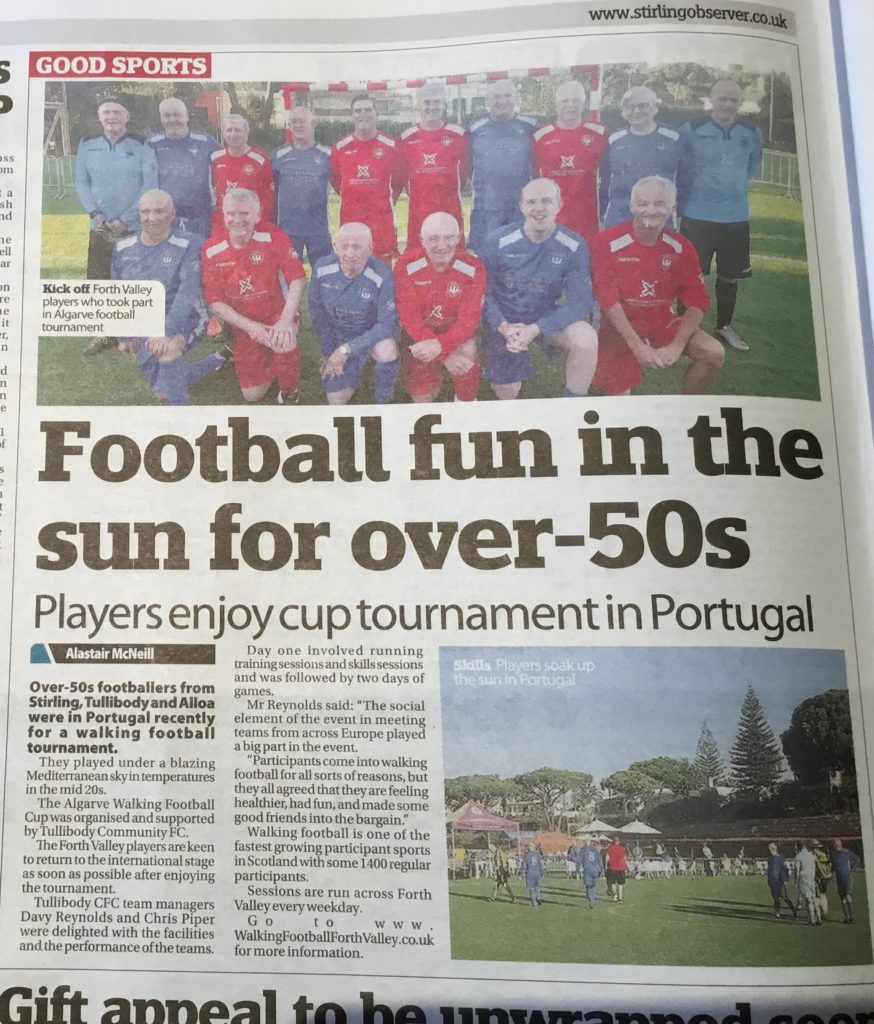 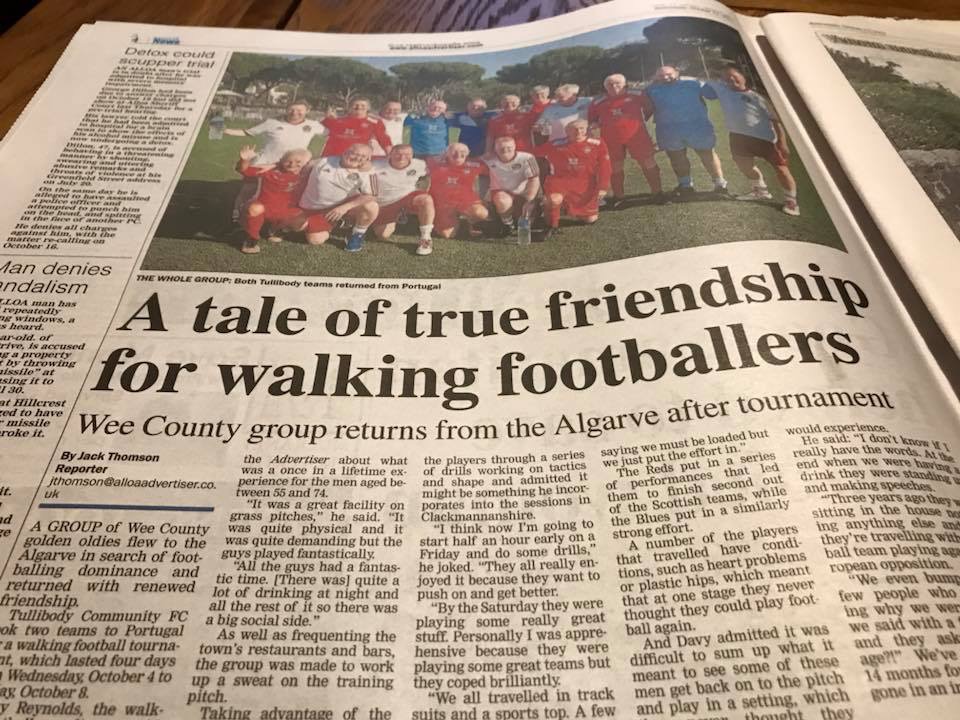 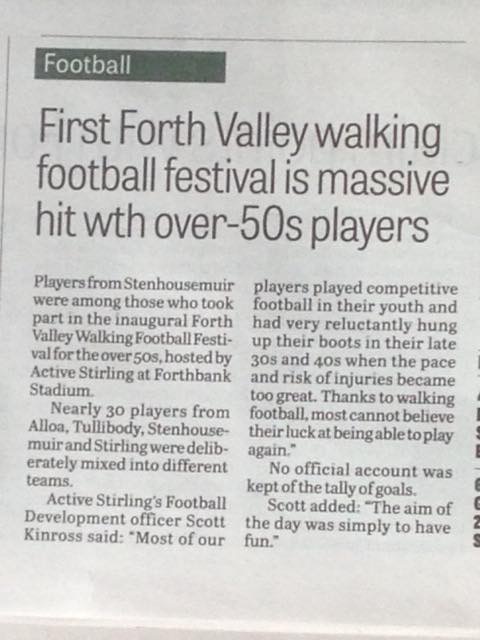 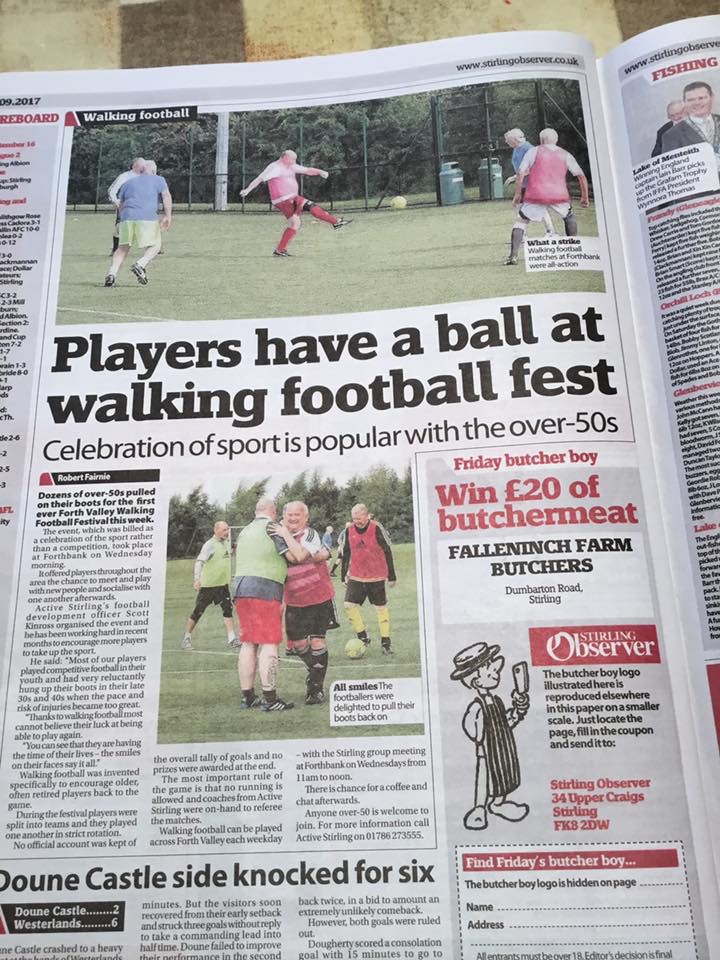 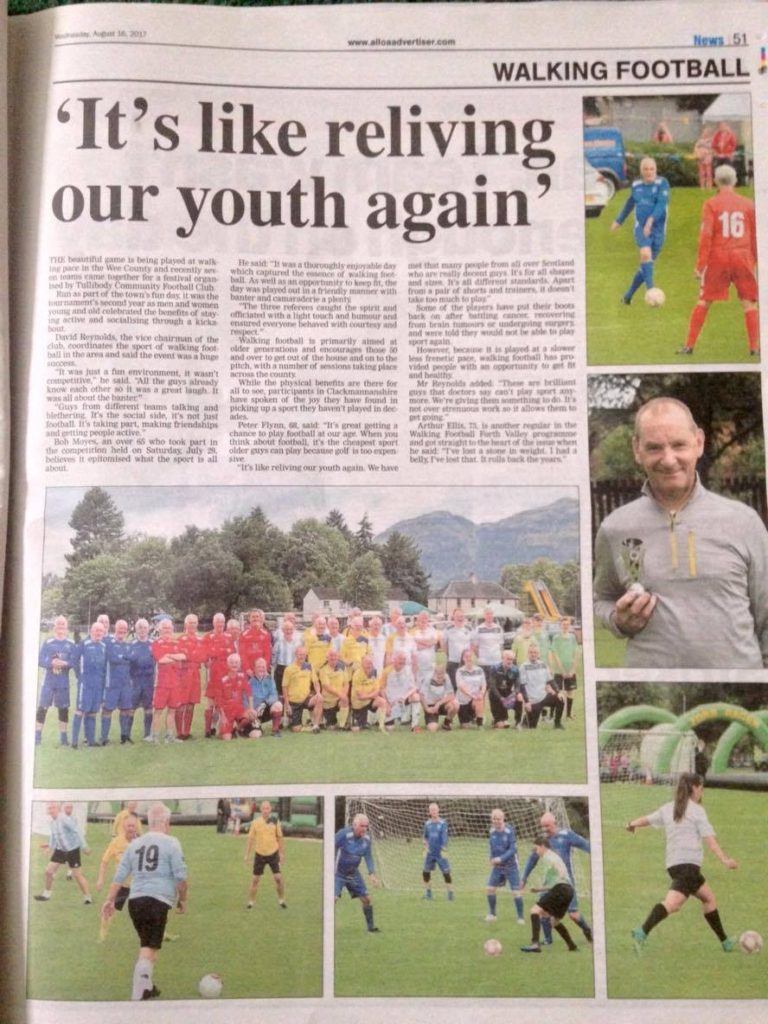